It is easy to say that one is addicted to marijuana, rather than to give a literal definition to their addiction to pot.

An accepted definition of addiction must first be established before we continue.

A person can be addicted to nearly anything rewarding. However, in terms of drug addiction it is said that you are addicted to a substance when you can no longer control your body and mind’s ability to function properly, uncontrollable urges overwhelm the user and lead to constant use despite negative consequences, and with the discontinued use of the substance severe withdrawl symptoms occur.

“Weed addiction” is a problem because marijuana is very abundant, and is generally easy to get a hold of. Millions of Americans use marijuana and many more millions have tried it. You can find it at parties, in the workplace, schools, government facilites, and it is sold everywhere on the streets.

Marijuana is natural and can be grown in almost any climate if cared for properly. You can find it across the globe, so there is no avoiding the marijuana effect. Some people find themselves stuck in what they consider to be a thc addiction, but is marijuana addicting? 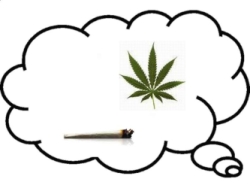 You may consider yourself to be addicted to marijuana for many reasons. Marijuana is fairly cheap, easy to get, and many of your friends use regularly. For some this can cause marijuana to be continuously on the mind.

Also, the marijuana effect is considered by some to be beneficial in many or all circumstances.

Why is marijuana addictive to them?

They may feel that the euphoric effects of marijuana enhances or alters their mood or perception to give them motivation, encouragement, enlightenment, acceptance, or even an escape from reality.

We all know that life is hard, and everyone carries a truck load of stresses. So, some people resort to this “weed addiction” as an outsourced solution to their everyday stresses to give them a “boost” in their creativity and personality.

However, these people’s weed addiction is more like habitual behaviors.

It is very easy to make something a habit or a norm, especially something enjoyable.

One might ask, how severe can an addiction to pot be?

Well, the severity of their THC addiction and marijuana drug abuse all depends on the type of person you are dealing with.

Some people have addictive personalities, and some people don’t. It is not typical for one to be hooked on marijuana after trying it for the first time, or even after the second or third.

For those who have been using marijuana regularly for years, they consider their cannabis addiction or dependence to be a habitual routine that they just don’t care to break. 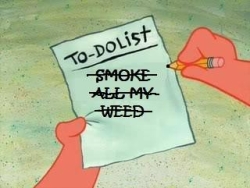 It may be that these people have too much time on their hands, or that they are always feeling bored or stressed. For these people, marijuana is or can be next thing on the to do list everyday.

It fills their free time when they have it, and if they have addictive habitual behaviors it may lead them to smoke at inappropriate times.

So is marijuana addictive for these people?

In a sense they have developed a strong>psychological addiction to the drug as an outsourced solution, similar to how some people do with a  chocolate eating obsession, but is the drug physically addicting?

Our definition of drug addiction it is said  that, you are addicted to a substance when you can  no longer control your body and mind’s ability  to function  properly without the drug, uncontrollable urges overwhelm the user and  lead to constant  use despite negative consequences, and with the discontinued use of the  substance severe withdrawal symptoms occur.

Marijuana  addiction has much weaker detrimental effects than that  described above. When a person who has been a user of marijuana for decades suddenly discontinues use, the physical cannabis withdrawal symptoms  are considered very minor and controllable, almost non existent.

Return
From Is Marijuana Addictive To Homepage